Product FinderShop for Gear
Green River soda was introduced to Midwestern drinkers in 1919, just as Congress was passing the18th Amendment establishing Prohibition. When Prohibition officially went into effect on January 16, 1920, some breweries turned to making a nonalcoholic drink call Near Beer, while others were churning out ice cream.

The Schoenhofen Edelweiss Brewing Company of Chicago turned to Green River. The Schoenhofen Brewery resided in the Pilsen neighborhood at 18th and Canalport. Two of the remaining original 17 buildings can still be found at that location. The lime based soda with a hint of lemon was poured into old beer bottles and sold in the market. With the vivid green color and great flavor, It was an immediate success. 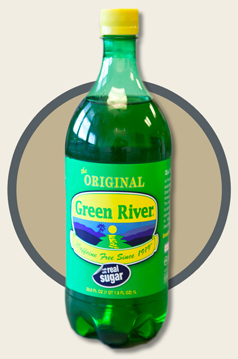